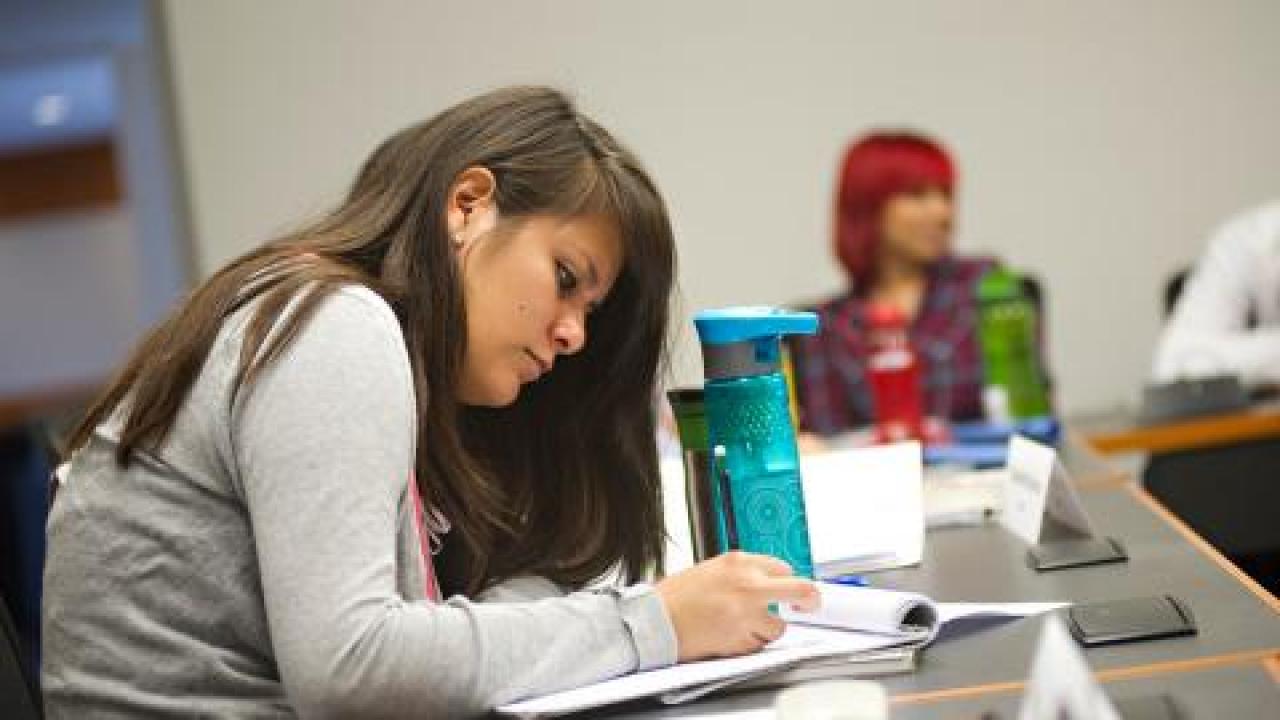 Spanish Majors Have Portable Skills for the Global Workplace 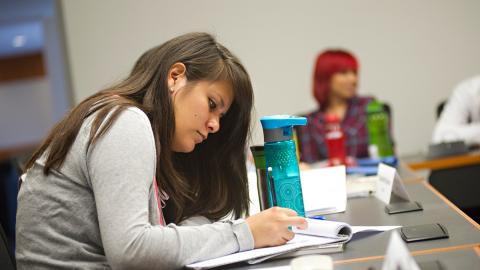 Above: Haydee Gonzalez, a double major in Spanish and political science, works on her notes before the start of her logical reasoning class in a pre-law outreach program at the School of Law. Majoring in Spanish gives students like Haydee skills in writing and communication —good preparation for a law career. (Karin Higgins/UC Davis)

This story was initially published on the "What can I do with my major?" blog: https://www.ucdavis.edu/majors/spanish/what-can-i-do-with-spanish-major.

An Education in Language, History and Culture Gives Students a Head Start

Spanish majors are a remarkable group of students who are preparing to change California and the world. They know that if you want to change the world, you have to start by understanding the languages, histories and cultures of its people.

Focusing on Spanish during your undergraduate education is a great place to start because there are 50 million Spanish speakers in the U.S., and worldwide more people speak Spanish than English.

Whatever your career goals — whether your focus is on bettering the life of your family, community or country — a Spanish major will provide you with the “portable” skills that can be transferred to many workplace environments.

UC Davis is a big school, and it can be easy to get lost. Spanish majors say that they are supported by their fellow students and that their professors in the Department of Spanish and Portuguese care about them. Yes, the classes are rigorous and professors have high expectations of their students. However, the faculty is dedicated to making sure that students are successful here at UC Davis and in life.

One Spanish graduate, Lizeth Cruz ’17, talked about community and scholarship this way:

Being a freshman, part of a minority and a first-generation college student can be challenging. But the people that I met in my Spanish classes would become my friends, my family and my colleagues, as later I had the honor of becoming a tutor/mentor for other students.

My Spanish classes not only allowed me to explore and develop my Spanish skills, but also enriched my knowledge of Latin American culture, and most importantly, developed my passion for teaching.

I began to love the beauty of how a language unites individuals from different cultural backgrounds. What I loved the most was how it created a community where you belong, and feel cared for.

My Spanish major not only allowed me to explore my native language and get closer to my roots and origins, but it also helped me gain a better sense of who I am as an individual; helped me create a networking system; and helped me develop skills such as teamwork, flexibility, adaptability, self-reliance and to be culturally competent: These are skills that are important in the labor force.

Now as a college graduate I feel happy about majoring in Spanish as I am currently doing what I love the most, which is teaching Spanish as a private tutor and working at the program Teach Another Language to Kids.

What do Spanish majors learn?

Spanish majors are taught by an internationally recognized faculty who help students focus on four areas: linguistics (the scientific study of language); Latin American culture and literature; Spanish-speaking communities in the U.S. (including California); and the culture and literature of Spain.

You will learn to write more clearly, read more attentively, and communicate your ideas more effectively — in both Spanish and English. These skills are important because most workers today end up changing fields frequently during their lifetimes.

Jacqueline Carranza says that her Spanish major is flexible.

Many people assume that Spanish majors are limited in their career paths, but pursuing a degree in Spanish has enabled me to do much more. With the courses that I have taken and the support from faculty members, I recognize the value that Spanish has, as well as how it can be used in different settings.

I saw first-hand how knowing Spanish was useful during my first internship at UC Davis, while I served as a Birthing Center intern at Sutter Davis Hospital. This internship sparked my interest to combat the language barriers that exist in the public health pipeline.

Majoring in Spanish has enabled me to improve my Spanish skills and gain more knowledge of ways to enhance language proficiency that will help me understand more about the health disparities that exist especially within underserved Latino communities.

Thus, it has prepared me to pursue my graduate studies in public health and find my passion within the global health community in order to create social change.

Who majors in Spanish?

A Spanish major is an obvious fit for students interested in literature, linguistics, policy and government, business, education, medicine and agriculture. Our students graduate prepared to work with Spanish-speaking populations in the U.S. in fields ranging from language arts to social services, education, commerce, advocacy, media and journalism.

When we asked Bernardino Hernández how his experience as a Spanish major helped him start a career in business, he wrote:

[English summary: Bernardino thought that by combining his majors in Spanish and international relations he would have an advantage in the labor market, and he wasn’t wrong. He now works for Johnson Controls (an international firm involved in building products and technology, integrated solutions, energy storage and information-based retail solutions) as a global director communicating about products and other company projects to Spanish-speaking clients. Thanks to his formative time in the Department of Spanish and Portuguese, he is able to dedicate himself to topics he is passionate about: digital media, translation and localizing content for his company.]

You can learn more about Bernardino’s story in this Hoy/Los Angeles Times interview.

Language abilities differ, but all majors get to next level

Some Spanish majors, like Bernardino, grew up speaking Spanish and want to build on what they know; other Spanish majors are still learning the language.  Whatever your ability, faculty members who are both teachers and scholars will help you get to the next level. Students like Jacqueline, Bernardino and Lizeth have learned to communicate their ideas to the hundreds of millions of Spanish speakers in California and around the world.

So, no matter what you choose as your job, whether your work takes you to Chile, Mexico, Panama or Peru, you’ll have the cultural skills and the language ability to thrive.

John Slater is an associate professor of Spanish and vice chair in the Department of Spanish and Portuguese, with research interests in modern Spanish natural history, medicine and alchemy as well as 17th century Spanish drama.

The Department of Spanish and Portuguese presents: an Interview with Bernardino Gabriel Hernandez