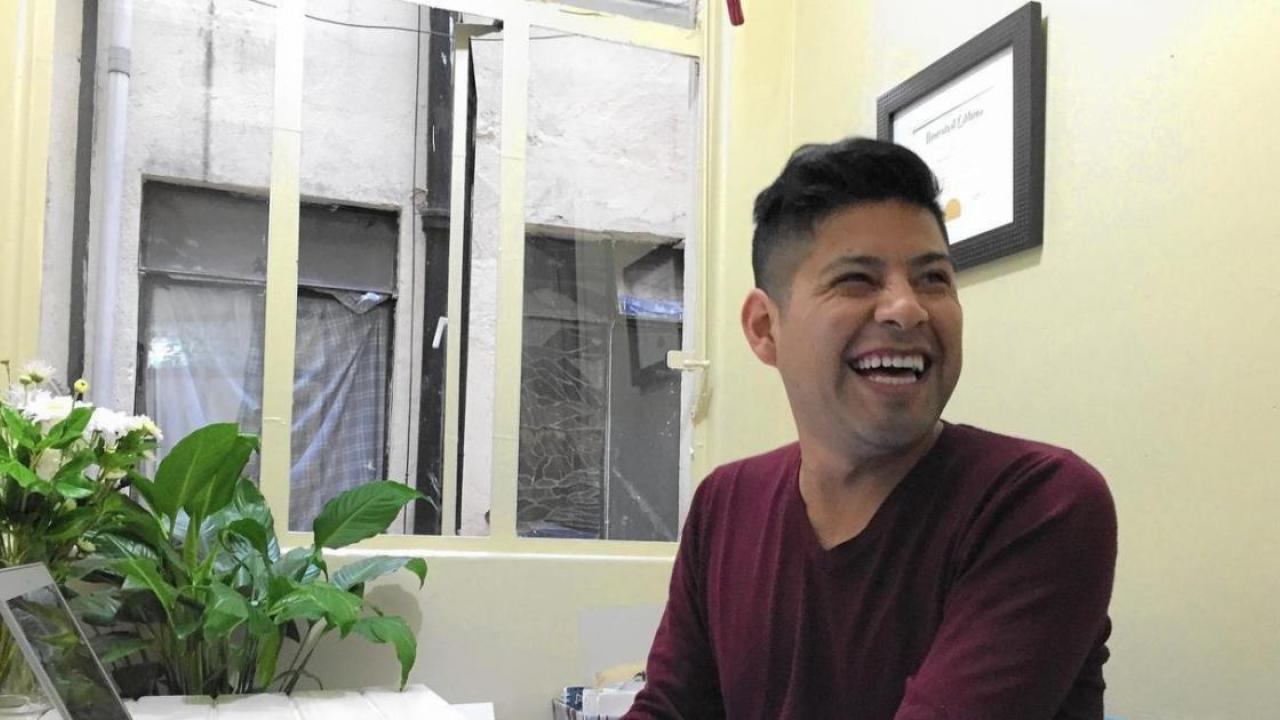 He grew up in the US undocumented, but fulfilled his 'American dream' in Mexico

Six years ago Bernardino Hernandez boarded a plane to Mexico City with not much — his high school yearbook, a printer and his college copy of “Thomas More’s Magician,” a novel about creating a utopian community in 16th century Mexico.

He had recently graduated from UC Davis, but he felt limited by his lack of legal status in the United States. Hernandez was 21 years old and unsure whether he’d ever reach his potential in a country that he’d called home since he was a toddler but that now wouldn’t allow him to work legally.

Before he departed, his disapproving father gave him $1,000 in cash but warned him, “I won’t pay for a coyote to bring you back.”

Though he gave up on his American dream in the U.S., he is now living it in Mexico.

Hernandez, 27, is at the helm of a translation company he launched last fall, leading a team of 15 linguists who offer services in nearly two dozen languages to multiple businesses, including eight transnational companies.

He regularly travels to the U.S. — as a business executive. Until recently he had been a high-level manager for a Fortune 100 company. His career in Mexico allowed him to save enough money to attend university in Canada, where he earned his master’s degree.

“I’ve traveled to more places in the U.S. while living in Mexico than while I was living in the U.S. I’m glad I did leave,” he said. “I wanted to find my own way.”

Hernandez is one of more than 500,000 people ages 18 to 35 who have returned to Mexico since 2005 after spending significant time in the U.S., said Jill Anderson, an independent researcher and activist in Mexico City who has studied the phenomenon.

Although some were deported, others, like Hernandez, voluntarily returned. They are often called “los otros dreamers,” or “the other dreamers.”

Hernandez’s success story runs counter to the much-told narrative of hardship and challenges many so-called Dreamers — people brought to the U.S. at a young age and who stayed illegally — face upon returning to their place of birth after growing up American.

Only a small percentage excel, Anderson said, but those who do are increasingly involved in a tight network, taking leadership roles and helping other former Dreamers. Their success is not a reflection of Mexico, but of their determination to clear hurdles in their path, she said.

“I think it speaks to the amazing potential of this population,” she said, who co-wrote a book, “Los Otros Dreamers,” on the subject. “They are definitely beating the odds, and I think it’s because they are determined to do it no matter where they land … despite the violence, despite the corruption and impunity that plagues many Mexican communities.”

Initially, it didn’t come easy for Hernandez, who mistakenly believed that his U.S. education would automatically give him a leg up in Mexico’s job market. As he struggled, he looked at his parents, still living in California, and what they accomplished as inspiration.

I’ve traveled to more places in the U.S. while living in Mexico than while I was living in the U.S. I’m glad I did leave. I wanted to find my own way.  BERNARDINO HERNANDEZ, 27

A free-falling economy in the mid-1990s and minimal education had prompted Emilio and Sira Hernandez to strike out for the United States. The couple left Oaxaca, taking Hernandez, 2 at the time. They followed the harvests for farm work until settling in Santa Maria, along California’s Central Coast.

Eventually they arrived at their American dream, renting and buying enough land to start their own large vegetable farm, selling tomatillos, squash and other produce.

Hernandez led a comfortable life in Santa Maria, excelled in school, lettered in high school cross country. If he worked hard, teachers and his parents told him, he could accomplish anything.

“I remember pledging allegiance to the American flag when I was a kid. I didn’t even know the Mexican national anthem,” he said. “For me, I was more American than Mexican.”

But slowly, Hernandez grew cynical. In high school, he soon discovered he didn’t qualify for most scholarships because of his legal status.

His parents could foot the bill for his undergraduate studies at UC Davis, where he earned a bachelor’s degree in international relations and Spanish, but he would have to pay for his master’s at the school’s Latin American studies program. He couldn’t because he couldn’t legally work.

It was 2010 and Hernandez had no way to legalize his status. It would be two more years until the Obama administration announced an immigration program that gave young people like him work permits and a reprieve from deportation.

Hernandez’s feelings of disaffection with the U.S. are common among the Dreamer diaspora, Anderson said.

“They realize that they did everything right, and they still couldn’t take advantage of that sort of mythical American dream,” she said.

When Hernandez arrived in Mexico City, he quickly realized that his American lifestyle of eating out all the time and renting an apartment in a hip neighborhood, Condesa, was too expensive in the megalopolis he now called home. He scaled down, moved to a more affordable neighborhood and shopped at open-air markets instead of chain grocery stores.

He eventually started to exploit his bilingual skills, approaching English-language schools to work as an instructor.

He learned he could make more money on his own and eventually left, taking his clients with him. He built such a large network of clients that he was once again able to live like an American: going out to dinner and nights out on the town with friends.

Still, his sights were on something more. He saved up and scored a scholarship for a master’s program in modern languages and Latin American studies at the University of Alberta in Edmonton, Canada. After two years in school, he had the option to stay in Canada and become a resident there.

He declined, wanting to return to Mexico to take advantage of what he said was a burgeoning start-up scene.

Christina Weidemann, who attended university and worked with Hernandez in Canada, said her friend’s ambition and smarts aren’t the only reasons for his success.

His ability to seamlessly navigate both work cultures, paired with his university degrees, helped him land a job as a translation contractor at Johnson Controls, a Fortune 100 company that produces automobile parts. He became something of a liaison linking American and Mexican workers within the company.

“I was able to communicate, for example, Mexico’s business and learning needs to the U.S. headquarters, because often most of the programs or business models are U.S.-centric and do not consider the business culture in Mexico,” he said.

After only eight months, he worked his way up to management. It led to an opportunity to travel for business, and he was granted a U.S. business and tourism visa in January 2015.

A month later, he flew for the first time to the U.S. for a business trip to Florida. The U.S. Customs and Border Protection agent at the airport did a double take when he looked at Hernandez’s profile on the computer.

“What are you here for?” the agent asked.

He was taken to another area and questioned about where he had lived in the U.S. when he was in the country illegally, but he was eventually let go.

Hernandez called his family from Miami to let them know he was stateside.

“They didn’t believe me,” he said.

In November, he launched a start-up called QuickTrans, which is something of an Uber in that it pairs translators, transcribers and interpreters with companies seeking those services. Some of his linguists are dreamers too. Hernandez runs the outfit from his kitchen table at home. His UC Davis diploma hangs on a wall above.

He has traveled to the U.S. at least half a dozen times. The second time, he made a side trip to California’s Central Coast.

He landed in Los Angeles and rode Amtrak to visit his siblings in Santa Maria — a trip he often made when he attended summer school at UCLA.

They greeted him with a big poster that read “Welcome back home.”

“It’s funny,” he thought to himself. “It’s not home anymore.”